If you experience an issue with the ADA Paratransit service that requires investigation, please do not hesitate to contact the Customer Service Department at (860) 724-5340 extension 9, Monday through Friday, 8:00 a.m. – 5:00 p.m., email hartfordcustomerservice@firstgroup.com, or fax (860) 955-2915. You may also write to: Customer Service Department c/o First Transit, 148 Roberts St, East Hartford, CT 06108.  If you are able, please file any and all complaints within 48 hours of the incident.

The forum began at 6:30 p.m. at the New Britain Public Library Community Room.

Customer Service:
In October 2017, 127 comments were received from passengers and 35% were compliments, 65% concerns: 12% invalid concerns, 14% unknown, and 37% valid concerns. Total concerns were related to late/early arrival, ride length or missed trips 22%, mechanical and/or safety concerns 10%, door-to-door and/or related to wrong drop-off or pick-up concerns 2%, and 27% other concerns related to driver, dispatch, and/or scheduling concerns.

In November 2017, 110 comments were received from passengers and 36% were compliments, 61% concerns: 19% invalid concerns, 9% unknown, 33% valid concerns. Total concerns were related to late/early arrival, ride length or missed trips 27%, mechanical and/or safety concerns 5%, door-to-door and/or related to wrong drop-off or pick-up concerns 8%, and 21% other concerns related to driver, dispatch, and/or scheduling concerns.

Staff Comments:
The District staff thanked everyone for attending and introductions were made. District staff spoke about the issue that occurred on October 17, 2017 when the ADA program experienced a crash with their scheduling software. Staff is developing additional precautionary measures to improve system emergency procedures and have been meeting to develop an action plan to address such concerns. District staff encouraged the optional idea of having riders wear their identification cards in order to help in emergency situations or in cases in which riders cannot communicate with operators. District staff encouraged riders who would benefit from traveling with a personal care attendant (PCA) to travel with one if there are certain tasks that riders need in which an operator cannot perform.

Kim Davis (Parent of ADA Rider Tyler Davis)
Notes ADA Paratransit transportation is going well. There was an incident last year where a reservationist cancelled the incorrect day in error. In the past Tyler had left a glove on the ADA vehicle which was later returned to Tyler’s program by the operator. Ms. Davis asked if a comment can be made on Tyler’s file to note that he is not social in the morning but that he does like the ADA operators. Ms. Davis noted some issues at times with getting the IVR calls at night. Ms. Davis complemented the professionalism of the reservationists.

Staff Response
Ms. Gomez noted that a new reservationist script is being worked on to make sure that information relayed during phone calls is confirmed and properly communicated including proper pickup/drop-off locations, contact phone numbers, and details noted. Ms. Gomez will follow up with IVR issues. District staff noted that a comment can be placed in Tyler’s file per request. First Transit now has a lost and found closet in which staff log all lost and found items so that the items can more easily be given back to riders.

Janet Chmura (Parent of ADA Rider Albert Chmura)
Ms. Chmura noted some concerns with IVR calls the night before. Albert had an issue months before with his trip from his work site which was resolved. Ms. Chmura asked why staff will sometimes ask her about her relation to Albert when she calls about his trips.

Staff Response
Ms. Gomez discussed that First Transit wants to note who is changing or scheduling trips just in case there are any issues with a riders’ trips in the future. Some riders will request a reasonable modification to be on their file to have his/her supports be able to change/request trips only if they mention a certain password due to privacy concerns. Ms. Gomez will follow-up with the IVR concerns.

The meeting concluded with more general updates on the ADA Paratransit. The First Transit facility moved from Hartford to a new East Hartford facility during the summer. The No Show policy was discussed with emphasis placed on contacting Customer Service if a rider had a circumstance outside of his/her control and cannot cancel a trip in time. First Transit is working on putting together an engagement committee in order to volunteer in the community and is open to suggestions on such efforts. If riders that have a subscription that needs to put a pause due to going on vacation, etc. then the scheduling department should be notified.

The next ADA Participation Group forum is scheduled for January 10, 2018 at 5:00 p.m. in the District’s Conference Room at Union Station, One Union Place, Hartford. The next Greater New Britain ADA Participation Group forum is to be determined. You may make a reservation for Paratransit service to and from the meeting by calling (860) 724-5340 and selecting option “1”.  The ADA bus fare will be waived for this meeting.  Please remember to give everyone a chance to participate; forum attendees need to keep initial questions and/or comments to five (5) minutes. Follow-up comments should also be kept to five (5) minutes. This information is available in accessible format upon request. 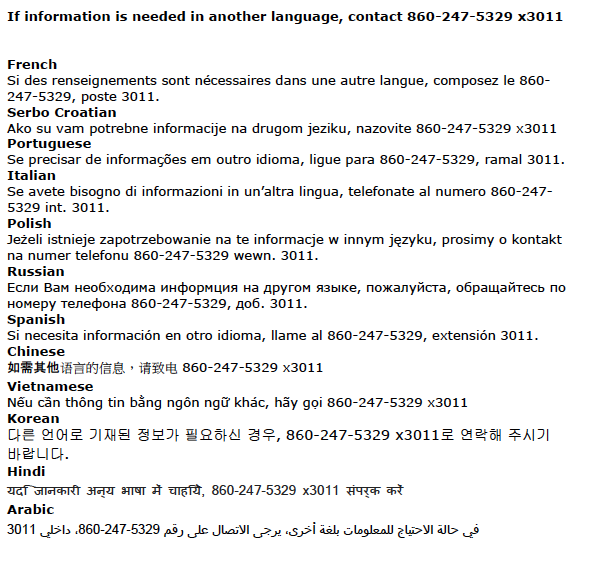